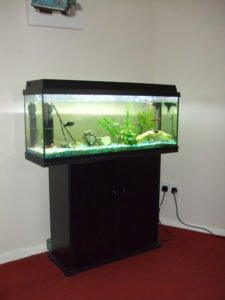 A 90 litre tank may seem small for a marine (saltwater) tank and it is considering how many marine fish you can actually put in one. Based on the rule of thumb that you can have 3 inch of marine fish per square foot of tank, an average 90 litre fish tank would only hold two. However if you wish to or are considering concentrating on something other than fish in a marine tank, it’s a good size to practice / start with.

There are all sorts of things you can keep in a 90 litre fish tank other than fish including live plants, live corals, natural rocks and wood and invertebrates. The latter is an interesting and varied choice!

For the beginner it may seem like a large ask (We would recommend the smaller but great Aqua One Fish Tanks range) but actually there are plenty of marine invertebrates out there that are easy to look after and interesting to keep. These include; banded coral shrimp, blood red fire shrimp, blue tuxedo urchin, brittle sea star, bumble bee snail, feather duster, various crabs and spiny star Astraea.

It should be noted that if you decide to keep a crab in your marine tank that most do like to go on land occasionally as well as be in water. This can be easily achieved by piling substrate up against the side of the tank so that it creates an area of land for your crab. Ensure that you have a well-fitting cover for your tank if you opt to keep a nipper as they can be quite the sneaky escape artist.

A good model to look for is the Fluval Roma 90 which comes with everything you need to get your new aquarium up and running in no time.